Why The Winter Olympics Kinda Suck

First, let me state that I’m constructing this argument from the perspective of a sports fan. I’m not sure if my opinion is going to hold any ice if you’re infatuated with Bob Costas or if you are a gung-ho nationalist (sounds Chinese, doesn’t it). I’d also like to mention that I was lucky enough to check out the Winter Olympics in 2006 in Torino and I had a blast. If G-d (or that big rock that hit Earth) had a mulligan on creation, I would recommend that he/she/it just make the world one big never-ending Olympics. Color War forever.

I’ll also add that the USA/Canada Hockey game the other night was one of the most exciting sporting events I’ve watched in awhile. The real miracle – hockey reversing the trend of sucking a little bit more every single day since the Rangers won the Stanley Cup in 1994.

Like any addictive/obsessive sports fan, I’ve been consuming these Olympics like I would a Sizzler buffet after Yom Kipper. But, for some reason, it just isn’t as fulfilling as a plate of fried popcorn shrimp on an empty, repented stomach. I wrote about how I enjoyed the Summer Olympics in Beijing. I had done all the research on the story of Shani Davis (weirdo) and examined half-naked photos of Lindsay Vonn. Americans were performing extraordinarily well. I even had met a bunch of the athletes at the last Olympics (Hoops and Hannah Teter) and had attended many of these events. Yes, I’ve been to an Olympic curling match and even stayed awake to tell about it! 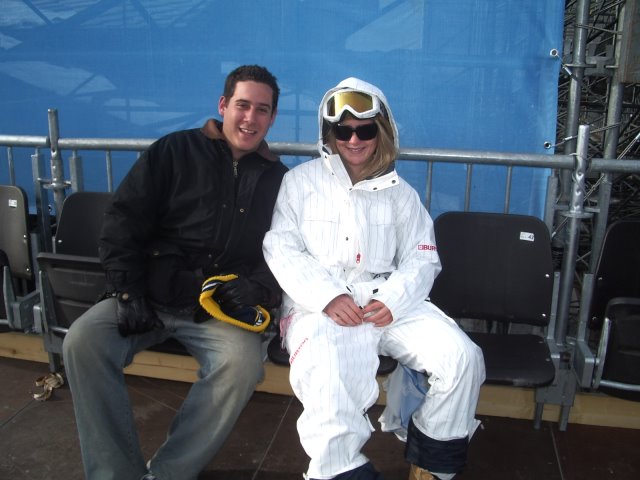 The WSJ mentioned that maybe it’s because what I am actually watching is a heavy dose of commercials (27% of total time), Costas (8.2%) sitting by a fireplace, and medal ceremonies. But I can live with that. I watch Sportscenter religiously and that is 0% live action.

I was close to putting my finger on it when my sister Courtney (I had shared by dissatisfaction with her) sent me this graphic.

It hit me like a Kermit Washington sucker punch.

Athletes don’t compete against each other in most Winter Olympics sports. They compete against a clock or, even more arbitrary, a corrupt judge. Unless you are Rain Man or a Daktronics scoreboard it’s impossible to split hundredths of a second. Therefore, every ski run, luge slide, speed skating stride and mogul bounce seem exactly the same. The only way to follow along is by understanding the splits and trying to decipher the emotion in the announcer’s voices. Unfortunately, Johnny Mosley’s voice doesn’t really ever hit the somber note. In his world, everybody’s killin’ it as much as the Dope!

Once you realize the timed sports are lame, you’re left with the “judged” sports. If you have ever watched the NBA slam-dunk contest or American Idol you already know that this is a total crock of Onion Soup. Figure skating gets to me the most. After they skate, the performers have to go to this little beema area and wait for judges to cut under the table deals that determine their fate. Meanwhile, I’m trying to count the number of grunts of estrogen that originate in Scott Hamilton’s larynx to figure out what place the skater will be slotted.

Imagine they didn’t keep score in basketball. Instead, they just played for awhile and then Bill Walton and Walt Frazier determined a winner. Actually, that sounds eerily similar to like the first three quarters of a regular season NBA game!

Snowboarding is not a competitive sport. There is no way to win. It’s an activity you do for fun. Is Shaun White an athlete or a real life reality television superstar? They might as well add Fist Pumping to the London games in 2012.

Curling is one of the direct head-to-head sports “competitive” sports. Go figure, it is a sport that people surprisingly enjoy. But, for all the hours of curling that I watch I have absolutely no clue what is actually happening. I feel like a chick (or my future wife) who will be forced to sit through hours upon hours of televised sports without really understanding or caring (but pretending too) what’s going on.

Short track speeding is actually quite entertaining. So is Roller Derby, the Nathan’s Hot Dog Eating contest and the Kardashdian sisters. Those are not Olympic sports.

Biathalon is a combination of cross-country skiing and shooting. Huh? Really? It’s as if the Olympic Committee was trapped in Newark during one of those Nor’easter snow storms and was inspired to create a sport from what goes on in the streets in downtown.

That leaves Hockey. As the saying goes, even the ice freezes on a dog’s ass sometimes, eh. Can March Madness start already, EH?