The weekend before last, two buddies and I decided to venture out and explore the islands of Lake Titicaca in Peru. Perhaps faintly familiar to you for its lewd sounding name, the highest navigable lake in the world has much more to offer than a few giggles. At 12,500 feet above sea level, the lake is both optically and pulmonaryily breath taking.

For the average gringo tourist the allure of the lake lies in its different islands. We hired a guide and commandeered an awfully slow boat to hit the high seas and discover new worlds.

Our first stop was the floating islands of Uros. The islands, and just about everything on them including their houses and boats, are made of totora reeds. Every forty years or so this becomes a bit problematic since the reeds sink into the lake at that point. The islands were originally created to isolate the Uros from enemies. If attacked, they could simply move their lands away from danger. These days the main rationale for living on a Party Island made of reeds seems to be purely for tourism. 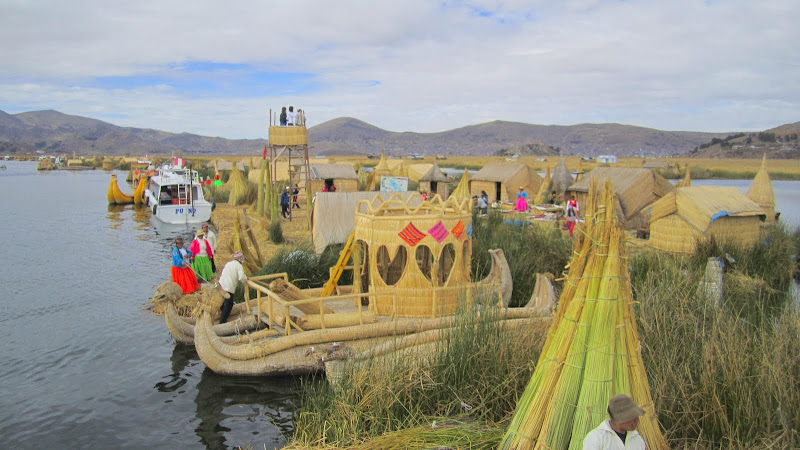 I can’t remember what’s supposed to imitate what but Uros is more of an amusement park ride than a civilization. Native islanders share just enough information about their home before they aggressively hawk their handmade crafts. The females serenaded us with a stirring rendition of “Row, Row, Row Your Boat”. After paying off a bunch of other natives (all you tea party people out there would be outraged) we were on our merry way.

After a uninspiring few hours on Taquile Island (they wear their woven hats sideways to show when they are sad) we inched on along to Amantani. This island is about 6 square miles containing a few thousand people within multiple villages. If the tv show LOST was filmed in Peru, instead of Hawaii, it would be on this island. Terrace farming is the main occupation as small plots of land are worked by hand. There are no cars, machines or hotels. Not much electricity either. There are two dogs.

We arranged to stay with a local family for the night. Our patriarch Angel and his 9 year-old son Wilbur met us at the dock and took us back to their home which had amazing views of Pachamama (mother earth). One of the family’s livestock (five goats) had birthed a new goat earlier in the day. Between the miracle of life and the visit from the tres payasos it was a pretty exciting day for them. Then we showered our family with gifts of grain, sugar, cooking oil, pasta, coco leaves and Oreo cookies. We even brought a soccer ball and toy dinosaurs for Wilbur and his sister. Check out the regalos giving ceremony!

We decided to go for a hike on the island with Wilbur. As we were walking around we ran into Wilbur’s amigo Oliveres who quickly joined our crew. Apparently, the word spread because within minutes we had a slew of rambunctious kids following us. It was time to play some Futbol. 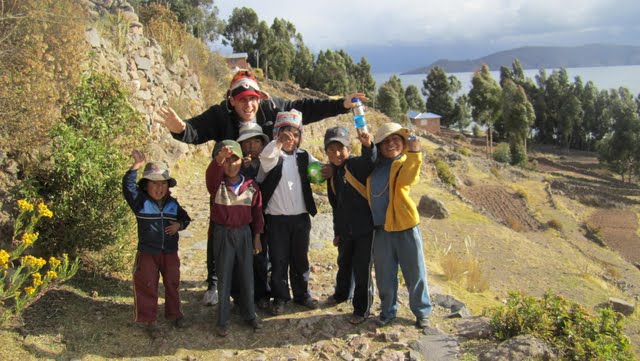 We split into three teams. I named my team after the daring Peruvian striker Jefferson Farfan. I butchered a bunch of Spanish words and terms to my Quechuan speaking teammates. They laughed at me. I played my hardest and stole the ball from my little amigos as much as possible. I chided my sweeper Jose for eating his boogers instead of paying attention on defense. We all had lots of fun.

After soccer we crossed the hill to the school house and taught the ninos about the birds and the bees. It was a one-room schools where every kid between the age of 5-17 learns together. Horace Mann would turn over in his grave. I read Goodnight Moon (Buenos Noches, Luna) out loud in spanish but then struggled to get through the Magic Autobus.

After a long day of living the simple life it was time to eat. Angel’s wife made us pourage and some kind of omelet that Jon couldn’t or wouldn’t eat. The dining room was actually a bit drab. No windows, one candle. Angel and his family ate on the floor while we sat at their only table. To break the ice and lighten the mood Jon sang some of his favorite songs.

Finally, it was time to party. We put on our costumes and went right back to the school house to listen to the sweet, soothing sounds of the native Amantani band. Yes, the Peruvian flute was played. We drank, we danced, we lived!

The next morning I awoke early at dawn and bumped into Angel on my way to the outhouse. We had a pleasant conversation in which I didn’t understand much of anything that he said. I did ask him about the status of his baby goat. A bit later we ate breakfast. I thought it was biscuits, Adam believed it to be potato latkas and Jon was pretty sure it was chicken nuggets! We bid adios to Angel and his family and hopped on our boat back to modern society.

I leave you with these final words of wisdom. The people of the island follow an old ancient Inca saying of ama sua, ama llulla, ama qhilla. The meaning: Do not steal, do not lie, do not be lazy. Sounds about right to me.