Season 19: The Johnnies Road To The Final Four Begins

Kids have their birthday. Gentiles have Christmas. Dudes have Superbowl Sunday. Happily married couples have their anniversary. Investment bankers pre-2008 had bonus day. According to Ralph Waldo Emerson, you should “write it on your heart that every day is the best day in the year.”

For Brian Greg Litvack the best, most exciting and thrilling day of the year unquestionably takes place today — November 14, 2008. The Johnnies, MY Johnnies, open the season at the newly refurbished Carnesseca Arena in Jamaica, Queens. That’s right, today the St. John’s University men’s basketball team is undefeated. Thanks to a new rule in the Big East that allows every school to make the conference tournament, they are only eight straight March wins away from a Final Four and ten wins away from a national championship.

As the title of this post mentions, this will be my 19th season (St. John’s just celebrated their 100th season of basketball this year!) as a die hard Redmen fan. In March of 1992, my 5th grade gym coach pulled me out of class to watch the first round of the NCAA tournament in the multi-purpose room. The Johnnies were upended by #10 seed Tulane. I went home to vote in the election last week and the polling was held in that very same room. When i walked in my stomach sunk from the memory. I entered middle school outfitted almost exclusively in Redmen garb my mom would pick up for me at the Nassau County Racetrack flea market. While my variety or SJU sweatpants didn’t do much to impress the girls, it did catch the eye of my sixth grade English teacher Mrs. Marks who happened to have a pair of courtside St. John’s season tickets. Luckily my father the “business man” (as courtney once told her guidance counselor when asked his profession) was able to work out a deal where those tickets became ours for the next eight years! My three highest moments as a Johnnies fan:

1) Artest led St. John’s scores 20 straight points in route to a rout over Marlyand in 1999 Sweet 16.
2) Artest nailed a three with 1.8 seconds left at the Garden to take Duke to overtime (they would eventually lose despite 40 from Bootsy) in 1999.
3) Marcus Hatten led Johnnies shock Duke in 2003. (I was at a horse race sports book in Acapulco during my senior year spring break watching at 10AM after staying up all night dancing with the devil at Palledium and let me tell you I’ve never PEAKED so hard). Check out this video to relive the moment.

Outside of a few years led by Artest and Erik Barkley at the turn of the century it’s been a downhill ride complete with increased frustration, coaching ineptitude and scandal. But the losing only makes me a more dedicated dreamer and a bigger fan. Following an eerily similar arc as General Motors, the Johnnies are poised to regain their prominence atop the college basketball world much like the Lincoln Mercury will dominate the drive ways in the next season of Cribs.

Let us not forget that St. John’s concluded its first century as the seventh all-time winningest program in the NCAA Division I record book with 1,659 wins and 831 losses. The school’s .666 winning percentage ranks ninth all-time in NCAA history, while St. John’s 26 all-time NCAA Tournament appearances ties for 13th. The program’s 26 NIT appearances and five titles are unprecedented. Helms Foundation national champions following the 1910-11 season, St. John’s appeared in NCAA Final Fours in 1952 and 1985. The program boasts 11 consensus All-Americans, 59 NBA Draft choices and 43 players that have scored 1,000 career points or more.

The so called experts have St. John’s picked to finish near the bottom or at the bottom of the sixteen team Big East conference. But I so passionately shun the experts and eschew their prognostications that it drove me to create Littyhoops.com, my very own college basketball website in 2002 which in turn led me to go pro in digital media which in turn led to me futzing around with this here blog on the side. If you were wondering why I have a bunch of random college basketball players in my header graphic, well, this post should provide the answer.

I cherish today because I can see clearly how the Johnnies will click on all cylinders and travel down the sweet road to the Final Four. Anthony Mason Jr. will stay healthy, be more aggressive and catch fire from outside to lead the Big East in scoring and bring the magic back to the garden that has been missing since his father ruled the court. Justin Burrell will have a breakout season in the mold of a NYC Josh Smith. Malik Booth will remind us all how truly awful Eugen Lawrence was at the point and bring a city flare, toughness and determination as the floor general. I can go on and on but will spare you how the messege boards on Redmen.com predict the development of Dele Coker (who averaged 3 points and 1.7 boards lasy year) thanks to his “new body”.

After tonight’s game against LIU, they head up to Boston for the first couple of rounds of the Pre-Season NIT. (Did you know that St. John’s is the only school in the history of college basketball to win the pre-season and post-season NIT in the same season which they accomplished in 1988?) Well anyway, there’s a part of me who is worried about facing Cornell on Monday (defending Ivy League Champion and NCAA tournament participant). Even if they do pass that test (Cornell’s starting point guard tore his ACL last month) they have a true test against Boston College in Conte Forum. So there’s a good chance that by Tuesday night I’ll know deep down that this season is a dud…that Mason Jr. still doesn’t know how to dribble, Justin Burrell doesn’t have the killer instinct and that Malik Booth is a little midget who can’t shoot.

But I’ll worry about that next week. For tomorrow, I’ll try to somehow convince my dad to go with me to the game. I can always pull the quality father-son time argument with him and I also think HowieHoops kind of gets a kick out of watching how hard I root. If he doesn’t bite it’ll be me and my Omar Cook jersey sitting up in the rafters. I have long ago realized there is no chance I’ll ever find anybody else to spare their Friday night to watch SJU vs. LIU in November. In fact, I write blog posts like this to perhaps peak your curiosity enough that I’ll somehow convince/trick you into attending a Johnnies game with me at the Garden come mid-January. Here’s the schedule!

So here’s to a new season. Hopefully, the beginning of a Championship season! Actually four championships! A Pre-Season NIT championship. A Holiday Festival Championship. A Big East Conferent title and an NCAA tittle to boot. A team can’t compete in both the NCAA and NIT in the same year or I would root for that as well. And don’t even get me started with the CBI (aka – the Mikey Cohen Invitational!) but I can dream for that too! 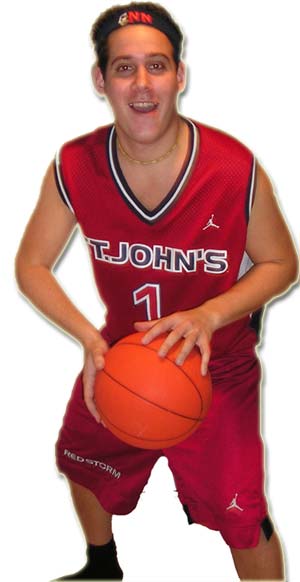