If you happen to be so chic as to find yourself in the women’s shoe department at Bloomingdale’s in SoHo this week you’ll be able to check out the new J.Litvack footwear collection. Fresh from the docks of Portugal, the footwear line is also featured in NYC at Lord & Taylor and other boutique stores (view list).

For those not in the know, the Litvack clan made their mark in the new country as cobblers. I’ve blogged about the rags to riches story of my Grandpa Saul who founded Erica (named after America) Shoes. At some point in the 70’s my father took the baton and the company soared like Al Bundy rising from the couch to grab the last buffalo wing.

My Uncle Jay is now the last remaining Litvack in the shoe business but that hasn’t stopped him from ambitiously creating his own new line. After successfully launching brands for Me Too Footwear, Steven by Steve Madden, Boutique 9 for Nine West he decided it was time for him to do his own thing.

According to the story on the website (The unc was unavailable for an interview) the collection is casual, sporty, cool contemporary and more about “attitude and all the details” than “covering all classifications”. Almost sounds like he’s describing his very cool nephew! Can’t wait till he comes out with the Littyhoops knee high pump! Here is a interview of Unle Jay describing the new line on City Soles TV.

I’ve been following along from the start and rooting for him over the last 18 months. Like any bootstrapped startup company it’s taken a tremendous dose of grit and tenacity (and an understanding wife) to get the venture off the ground. He recently told me a ridiculous story about hiring a local Portuguese lawyer he found on Google to help solve an international dispute… and it worked! Like any small business owner he’s problem solving all day and all night and quickly iterating and improving the business. I get a kick out of hearing him and my aunt describe their exploits in the digital world getting the J.Litvack website and social media strategy (Facebook) going. He has yet to take my advice though to pronounce the brand Jay Dot Litvack.

I’m proud of Uncle Jay (and I’m sure Scruffy would be as well). He’s going 100 miles per hour these days. This week he’s in Vegas for the big FN shoe convention. The first orders of J.Litvack have shipped and hit stores as of this week. It’s a big accomplishment. Hopefully he can stop for a second to appreciate this milestone. Plus, it’s another feather in the cap for us Litvack’s. Might I add that I have yet to hear about a Galitziana shoe brand (unless they were the guys behind Starbury’s).

Below is a picture of my cousin Samantha modeling the shoes. The photo is so striking that you might think Sam was a professional model but in truth she’s just a recent college graduate (Go Blue!) who still lives at home with her parents and is dying to move to Murray Hill. To be clear, my intention here is NOT to embarrass her. That would be awkward. Did you know that Sam and her sister Jackie are the inspiration for J.Litvack!!! 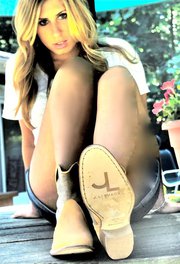